In the financial domain, the lien release letter is one of the most significant letters that serves an immense purpose for financial institutions. Basically, this is the formal letter that lifts or removes the lien on the concerned property of the borrower. The right of lien is one such right in which the financial institution has the right to keep possession of one's property until a debt is paid or a legal action is resolved. These rights are generally given or assigned by the law to the institution as collateral for the loan. Here in the article, we shall discuss more on the significance of this lien release letter. The readers will also get access to several samples of the letter for their reference.

What is a Lien Release Letter?

How to Write Lien Release Letter?

Well, the lien release letter is basically the letter that involves the technical law terms in easy to understand language. The letter is significant as it frees up the possession from one's property. So, the letter needs to be written by keeping some simple aspects into consideration. The letter starts from the basic introduction to the property on which the lien is associated. It also addresses the loan against which the right of lien was put forth along with the respective names of the borrower. Subsequently, the letter states the removal of the lien from the specified dates as mentioned in the letter. The letter makes it clear that the borrower has the rights to the property at their own disposal. So, with all these aspects one can draft this letter of lien release.

Well, we are aware that the sample letter of lien release is always helpful in providing much-needed exposure to the readers. It helps them in understanding all the practical aspects of the letter for much better clarity. For the same reason, we are going to compile several samples of this letter. We urge the readers to have a look at all the samples for their reference.

The title lien release letter is simply the letter that restores the title of another person over the property by removing the lien. This is a very general and basic letter of lien that most financial institutions use for themselves. Here below readers can find the sample of this particular letter.

We are the official lender if the loan to Miss Ariana Marie declares the removal of lien on her specialty vehicle from the immediate effect of this letter. We would like to make it clear that the outstanding amount of the loan is now paid in the full & final settlement. The concerned vehicle on lien now stands free to her and she can kindly take back the possession of the vehicle. The ownership title of the vehicle is in her name and she can dispose of it on her will.

The bank is the key financial institution that mostly enjoys the right to lien on the properties of its customers as collateral. Subsequently, the banks also remove the lien upon the successful payment of the loan by the borrower. Here we have the sample letter of lien from the bank for the reference of readers.

Dear, Miss Mia we would like to inform you that the authorities of the bank management have decided to remove the lien from your real estate property. It's the followed-up action from the bank as you have paid the outstanding amount of the loan along with the due interest. You would be pleased to know that you can take possession of your real estate property by visiting the bank. All the further details of this lien removal letter are mentioned in the letter itself.

Well, it's the general practice of the banks to take back the possession of the car if the borrower makes the default in the loan amount. Bank has the legal rights to lien the property which has the element of loan on its purchase. You can check out the sample letter of this car lien release letter.

Dear Ma'am,
This letter is to inform you that the lien is now being held back by the authorities of the bank. The bank has taken this decision as it came to know about the recent payment settlement from your end. With this, we are restoring back the possession of your car along with its appropriate title. You can now enjoy the possession of the car as it's true and the permanent owner.

This is yet another lien release letter in the context of the vehicle whose possession has been kept aside from the owner. With the release of the lien, the owner gets back the possession of the vehicles. With our sample letter, the readers can have the basic idea of this letter.

The Letter informs and certifies the fact of lien removal on the vehicle auto of the borrower. Readers can read all the associated information about the same ahead in the letter.

Dear Sir,
This letter is to kindly inform you about the removal of the bank lien of your auto vehicle which is meant for transportation purposes. The letter takes back the lien from the above-mentioned auto vehicle with an immediate effect. Since the owner has paid all the dues on the loan of financing the vehicle, therefore, the owner gets back the title of the auto vehicle. Kindly feel free to reach the branch of the bank for the possession of the vehicle.

The mortgage in simple terms is the kind of loan in which the bank keeps the collateral of the security in the property. This is what we know as the right to lien and by the payment of loan the bank restores the ownership of the property to the borrower. Here we have the sample of this letter for the understanding of readers.

This official letter from the Standard Visa Bank is to inform you that the mortgage on your loan now stands free from the side of the bank. As you have paid the entire amount of your pending loan the bank is therefore at the pleasure to release the mortgaged property. You can kindly visit the branch of your bank to collect the ownership papers of the property and claim your possession. All the other details of the mortgage release are there in the letter for the utmost clarity of the parties.

It's the general practice of most banking and other financial institutions to keep the collateral of property while granting the loan. Once the borrower pays the loan then banks give back the lien on such property. Herr, we have the sample-specific letter on the release of lien for such property.

We are glad to announce to you that on the repayment of your our bank has decided to free up your collateral property. We highly appreciate the kind gesture of timely loan repayment from your side. JP Morgan always values and looks forward to entering into more deals with such timid customers. We invite you to our bank to collect the papers of the collateral property and have the recent loan offers from the bank.

When the banks or the other institutions take possession of the various automobile then it becomes the Automobile lien. This is generally done when the loan has been taken on the purchase of any automobile. When the borrower fails to pay then the bank can decide to take possession of the automobile. However, the same bank can give back the ownership of the same automobile to the owner after the successful payment of a loan. We here have a sample of this specific letter.

This letter specifies to remove the lien on the concerned automobile in the letter ahead. Kindly consider this letter as the potent proof of ownership in the name of the owner of such a vehicle.

The letter in general announces the end or removal of the lien on the concerned vehicle in the letter. With this letter, we hereby state that the affirmation of the final payment of the loan on the vehicle. We, therefore, restore the ownership and possession of the vehicle to its true owner. The owner will be in the authority of disposing of the vehicle at his discretion.

So, this is how the letter of lien release functions in the financial domain between the financial institutions and borrowers. We hope that our samples letters would provide the readers with some significant insight into these letters. They can also get the template of the letter to draft these letters on their own. 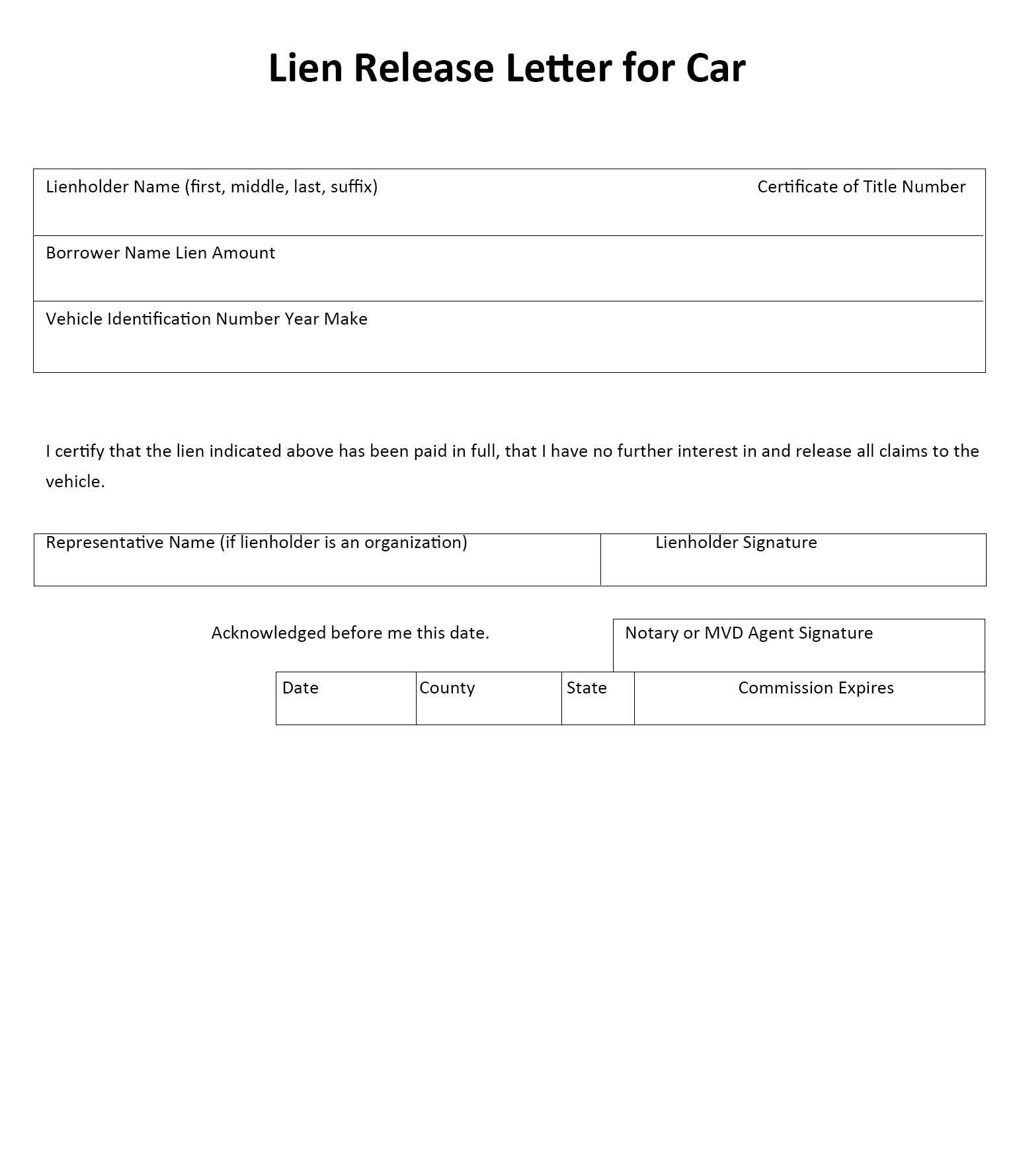