Are you in trouble because you upset your friend somehow? Well, we understand why you are here. But there is no need to stay upset about it because there is always a way out of situations you find yourself miserable. Here, an Apology Letter to a friend would work for you. If you feel that you have done something wrong and you are upset and sorry about it, just write an apology and remake that friendship that you might share with this friend, may be even stronger. An apology letter is the best way to put your feelings and emotions that you are feeling and going through. It is just a matter of putting the right words with proper emotions and well, punctuation too. 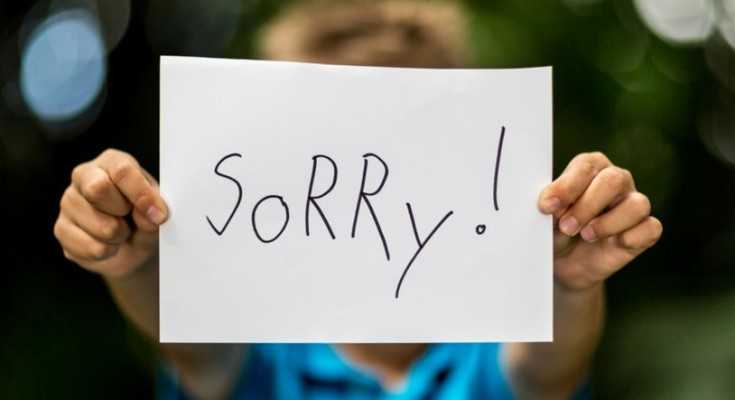 Don’t know how to write an apology letter? Well, that is why we are here to help you out and to guide you to write an apology letter to your friend. We have given various samples and examples here below which will help you in finding one right guide for yourself. Just go through it and help yourself. We’ll be thankful to be of some help in resolving your misery and in remaking your disturbed friendship.

How to write an Apology Letter to a Friend

Well, this depends on a number of factors that how a good apology letter shall be written. It depends upon the mistakes you committed and what exactly you did. If a mistake is of humongous size, for example, a rapist is not supposed to be writing an apology letter.

An apology letter is meant for those mistakes that a person has committed knowingly or unknowingly but the one who committed is really sorry and wants to correct it or would rather never repeat because the friend is more important than anything else. So if you are one such person, then we, in fact, appreciate your stand and value your sentiments. We would guide you through in writing a good apology letter. Here are few tips for you:

Always remember that while writing an apology letter to a friend, you should always mention the reason behind you committed that mistake. Be it big or small, whether there is a reason or not, mention it clearly. You can sometimes write that you were out of your mind and just did something that you shouldn’t have and now when you have realized, you are asking for an apology. People appreciate honesty. Honesty can be judged by your writing style, so I would suggest that if you are really honest, then only write an apology letter because then otherwise there will still be loops in friendship. Writing an apology letter would demand putting some emotions too along with real facts. Just write your heart out and send it.

While being friend, there comes situations when we end up committing mistakes significantly which we regret later on. There are pretty good chances that your friend hasn’t been talking to you or might be avoiding to have any conversation with you, in such cases one of the best way is to write an apology letter and send it to them via mail or by writing on a paper (that would be the best!) or any other mean you might prefer.

An apology letter to a friend starts with greeting your dear one. Start with an statement clarify how you are feeling and why you have decided to write an apology letter. One sample example is given below:

Apology Letter to a Friend you Hurt

I understand the reason you are avoiding me and why you are not picking up my call or replying to my messages. I am sure the only reason is that you are hurt and that too because of me. But, I couldn’t stop myself and putting me down in writing that I am sorry. I am so sorry for being such an idiot. I should have told you before about it before someone else’s inform you. But, I never meant to hurt you rather I just couldn’t find the guts to share and opened up myself with you, I don’t know why.
Xyz, Can you forgive me? Not because we are friends but to give me another chance to be one. You have always been so supportive and kind (write only if you feel like) to me and I really don’t want to lose you. Please accept my apology, or at least talk to me. I don’t want to make any justification for the mistake I have committed, I just want an apology. Hope you would understand.

Your Friend,
(Your Signature)
Lillith Daniel

This is just a simple example that might have given an idea about the way of writing an apology letter. There could be various more other ways, mentioning the reasons and intentions behind. It depends upon the situation you might be in. There are more such examples below.

Apology Letter to Friend for Misunderstanding

I don’t know whether that would be an appropriate time to ask for an apology or not but I had to ask for one. This has been many days since we talked and I understand the reason too. I am not disappointed that you are not taking my call or messages, anybody at your place might do so. We have been friends since such a long, still I don’t know how I could not understand you, rather got exaggerated and misunderstood you.
I am really sorry xyz. I really am. I had no idea that I would mess up our relation this much. This has been one of the toughest times and I just can’t stop thinking about us. I should have confirmed it with you before coming to any assumption. I can’t believe I spoke those words to you because of an idiotic misunderstanding. How can I be this bad for you? I am sorry xyz, can you at least talk with me? Please?
I understand that I hurt you, but these differences between us hurting me too and I can’t handle it on my own. If you want I can ask this apology openly too. But please give me a chance. Please.
Hope to hear from you.

With love,
(Your Signature)
Rahim Henderson

A person’s behavior says a lot about their personality, state of mind and intentions too, sometimes. So, it is very essential to maintain good behavior while being in any relationship, be it with friends, siblings, strangers or any relative. It is like an essential commodity to live life in a harmonious manner.

So while writing an apology letter after bad behavior, remember to be polite and simple. A letter shall never show an egoistic side of you, which you might possess or not. Sometimes ask for apology along with asking for help in return to make you a better person because you are rude sometimes which results in your bad behavior. Keep the format the same and just write an apology letter down with full honesty.

I’m writing this letter because I’m ashamed of my behavior the last time we were together. Even though I behaved so bad with you but you stayed absolutely calm and patient about it. I appreciate your generosity.
Please forgive and accept my apologies, I’ll be grateful. Also, I would never repeat this bad behavior.

For being rude, you can write a similar letter of apology and place it right in front of your friend. Rudeness can spoil your friendship only if it is of extreme intensity. In a friendship, there are cases that sometimes one friend is bit rude all the time, but that is based upon mutual understanding between two people and nobody get offended or hurt. It’s just a part of somebody’s lifestyle.

But if it is sudden and a friend is suddenly rude to you, there might be something else. It could be you too. And hence, an apology letter to a friend for being rude becomes important. Here’s a sample for you,

Apology Letter to Friend for Being Rude

We have been friends since such a long and have gone through many ups and downs. I remember how nice and loving you’ve been to me in all my crisis and stand as firm support to me. But, I might not be that good friend like you. I can’t imagine you being rude to me as I’d been in past days. You surely don’t deserve such behavior.
I am writing this to ask for your apology for my rude behavior. I am really for hurting you and I promise that I would never repeat such bad behavior. Please consider and forgive. I miss you.

Hope to hear from you,

Apology Letter to Friend for Not Being in Touch

This has been such a long I’d contact you. I hope you’re fine and doing great at your end. I have been stuck in my stuff and just couldn’t find myself talking with people including my friend, you. I am sorry for not being in touch for such a long. There has been a lot of stuff going on that I would share when we’ll meet.
How have you been doing? I have been missing you lately. I hope you are not angry with me. Even if you are, please forgive and meet me soon.
Hope to hear from you. Lots of love.

Writing an apology letter to best friend can be of many words. Best friends would love to read more about themselves from their best friend forever. So don’t hesitate to extend it to little. It can be full of memories and moments and share your side of story and apologize politely.

This would definitely work and appreciable.

Start with a dear xyz or their nickname that you use to call them. Apologize and write your heart out.

Hope you had a happy reading. Take care.

Apology Letter Template to a Friend Template in PDF and Word (doc.) Format: 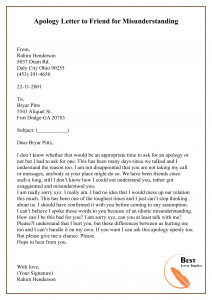 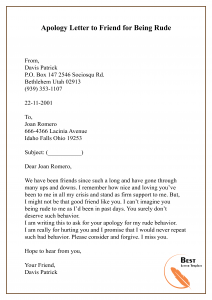 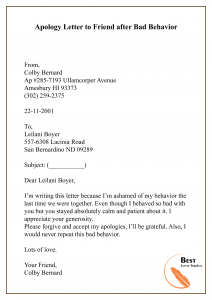 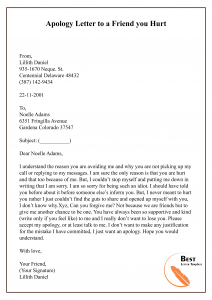 The team behind BestLetterTemplate.com understands the importance of effective communication in today's professional world and strive to provide you with the tools you need to make a lasting impression. Our team of experienced writers has created a wide range of templates for common letters, including recommendations, resignations, and cover letters. All of our templates are completely free to use and are designed to save you time and hassle. Whether you're a student, a recent graduate, or a seasoned professional, we've got you covered.