Sorry is not just a word, sometimes it’s an emotion, apology, sentiment or a dialogue that may be a result of someone being affected by someone’s action. Be it a personal or professional apology it comes with a lot of reasoning and explanation. But, not everyone is good with saying sorry. It takes a lot of time courage and efforts to say sorry to someone and accept your mistake. However, giving a verbal apology is not easy sometimes, so in those cases, you might need to write a sorry and explain your feelings and emotions. Yes, you got that right. A sorry letter explains in detail the feelings and emotions you are going through and owning it by sending this letter across.

Writing an apology letter is a hard task because, many people do not accept their mistake easily and think that accepting an apology would reflect badly on your character. Not apologizing or just saying sorry for the sake of it will not solve the problem sometimes. So, writing a letter is the only solution that you think is appropriate. However, writing this letter come with its own terms and conditions. Instead of struggling with how to apologize it is better to know how to write this letter. Looking at few of the samples will help you in understanding the do’s and don’ts of writing this letter.

How to Write a Sorry Letter

Elements of a good Apology Letter

I hope you are doing fine.  I am writing this letter to apologize to you for _______(Reason for Apology). I can understand how you feel at this time because I hurt you. I hope you will understand my feelings and will forgive me for this. I can’t explain how bad I am feeling. I am missing you all the time. I am not feeling good about whatever happened and you are upset with me because of that ugly situation. I assure and promise you that it won’t happen ever again. I am going to see to it that I don’t repeat my mistakes and not make any new mistakes either.
You are very special to me, and I want you to know that I will make you feel special today and always. Please forgive me for what I did. I hope that you will understand that there are many situations in life that get out of control and you cannot do much about it and I feel that this situation will not spoil our relationship in any way. Let’s hope and move towards creating a better bond that will bring a memorable time for us.

With lots of love,

I am extremely sorry for _______ (What was the Reason for Apology). Believe me, it was not intentional.  I know I have hurt you a lot and disappointed you. I agree that I was wrong on my side and have caused you a lot of pain.
I regret what I have done and I hope that you will forgive me. I promise you that I will not repeat this behavior again in life. I know you don’t deserve whatever I did with you. I dream of you every moment and I wish to spend my life with you and we both are just perfect together. Let’s take our decision to the next well.

With lots of love,

Yours truly,
(Your Signature)
Hedy Greene

Mom, my world revolves around you and my motive of sending you this letter is to say sorry to you for the wrong behavior that I showed you last week. Over the days, I have realized that I did hurt you badly and you are upset with me at this point in time. I know that you care for me and so, you have always told me to control my anger and try to avoid being a shirt tempered individual. When you started shouting at me for not informing you when I went out, I lost my temper and shouted back at you. It is indeed very bad on my part. I should not have done so. Now I repent for what I have done.
Being my mom, I hope you will understand my emotions and what I feel and you will forget about what I have done and forgiven my behavior. I promise you that I will not repeat this behavior again and will try to overcome my anger and short temper habit. I will become a better human being with time and you will certainly see a change in me.
Please write back to me so that I feel better.

Yours lovingly,
(Your Signature)
Lawrence Moreno

I am writing this letter with remorse and request you to forgive me for_______________. I want to apologize from the bottom of my heart and I will try not to repeat this mistake and be a good husband for you.
As years will pass by, I feel that our bond will become stronger and we both will learn and understand each other in a much better way. I will be a better partner and will not hurt you again and make you feel bad about anything.

Yours lovingly,
(Your Signature)
Nyssa Vazquez

I know that you are upset with me and that is the reason that I am writing this letter to you to apologize for my behavior. I lost control over my emotions and it took time for me to realize my mistake. I know I must have hurt your feelings. But nothing was intentional. I hope that you will understand the reason behind this behavior and will forgive me for my this irresponsible action, so you will forgive me.
I hope to hear from you at the earliest.

Yours lovingly,
(Your Signature)
Forrest Ray

Sample 6: Sorry Letter for Her/ Him

I am sorry to have hurt your feelings. You have known me for years and I have never shown this kind of behavior in front of anyone and I am ashamed for my behavior also. I regret what I have done and the reason is despite knowing what I am going through and what my problem is, I felt that no one understands me. I was already upset and the disturbing remarks from everyone made me more uncomfortable and upset.
However, sweetie, I hope you can understand what I am going through know it was not your fault, and I didn’t mean to take it out on you, but I was frustrated.
You have been a great life partner and wife to me and now I feel that I was not a good husband and I never fulfilled my responsibility towards you. You come from a very well to do family, and you loved me so dearly without any complaints. I will try those things between us will get better and it’s just that I need you to be with me no matter what others speak about me.
I sincerely apologize for yesterday’s behavior.

I am sorry for what I (said, did) the other day. I have realized that I was wrong and I should have not shown you that behavior in any way.
You are my idol and I have felt that your intention is to make me a better person in every way. I also feel that you have been supportive in making learning and academics an easy process for me and the class.
I regret this behavior and I promise that it will not happen again. Please forgive me.

I'm so sorry that I gave you an invalid solution to your software malfunction. I deeply regret the inconvenience caused to you and would like to apologize for the loss.
I misunderstood the issue you were having when we were speaking on the phone, and that's why I ended up giving you a solution that was incorrect. That's no excuse, and I apologize for my unguided actions. Next time, I will be sure to ask the various type of questions of my customers to fully figure out the situation in the past offering a solution.
I hope you can forgive me and that we can continue to work together if you have any more support needs.
Let me know if you have any questions, comments, or concerns.

Here I am writing this letter because I want to apologize for the error that was made by me in sending wrong reports to the customer. Though this was not intentional, but I apologize for the loss the company will have to bear because of this action. I would like to apologize for it and will try to be more attentive in the future.
I know I cannot turn back the time and set everything right but I would certainly like you to know that I am sincerely and heartily sorry for the issues affect and for the loss the company is bearing because of me.

Yours truly,
(Your Signature)
Celeste Slater

It is quite unfortunate that …………………………. Although it was not completely my fault, the damage has been done. You have been a great friend and support to me throughout all these years and in every situation, so I hope that you will forget what has happened and this action will not spoil our friendship in any way.
I hope I am not causing any further inconvenience to you, and I am sure you will understand the situation and support me in this regard.
Once again, I really feel sorry for the trouble I have given you. Hope things will get better soon.

Affectionately yours,
(Your Signature)
Keaton Underwood

I am really very sorry Momma I can not imagine how many times I hurt you when I said I do not want you as a mom. You know that being your daughter is my greatest strength and support in life. I am regretting the moment that happened between us and that has made you upset from me. I know that you have always thought well of me and never wanted me to be this person that I have become. But, I would like to tell you that this has peened because -------------- (explain the reason).
I will try to erase those memories and start a new chapter in life, which will be more responsible and be a better person. I hope that you will support me this one last time and help me in the journey of being a positive and responsible person. 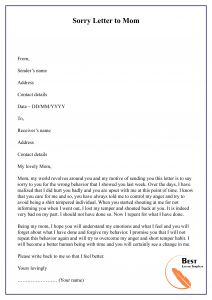