A proposal letter for project is usually written to convince a client to start working on a project. This project can be a new project or an old one which was halted due to some reason. Therefore, it can also be directed towards the members of the same company to re-initiate a particular project that was halted before.

The project proposal letter format is like any other formal letter. It starts with the name and address of the sender and date is written after that. After the date, name and details of the recipient are mentioned and followed by a subject line. The main body of the letter begins with addressing the recipient and normally the length of the content is brief and to the point.

How to write a proposal letter for a project?

Before writing a proposal letter for a project you must have a basic understanding of writing a formal letter. You can also refer to the numerous samples and templates which are readily available on the internet.

Here are some tips that you should follow while writing a project proposal letter:

This letter is normally written by students to the higher authorities like a principal to request permission for a new project or to restart a halted project. A sample of this letter is as follows:

I, Kyla Olsen, a student of Second year BSC, am writing this letter on behalf of my fellow classmates. Last semester the students who are studying Biology had started a project on biological disorders in insects but we had to stop the project in between due to the interim exams.
However, due to the wide scope of this project and the knowledge it can impact us, we are keen to start working on it again with the help and permission of our biology teacher Mr. Ralf Collins. We also assure you that it will not affect our academic performance or grades at all. Therefore, we request you to grant us permission to re-initiate this project.
I hope you will respond positively to this letter and I thank you for your time and consideration.

This letter can be used by students of a college, doctors of a medical college, scientists of an institution, professionals of a company, etc. to seek permission for continuing a halted research or to start a new project. Here’s a sample for your reference:

I, Sam Powell, am working as a Jr. Atomic Scientist in your reputed Bhasha Atomic center. A few of my colleagues and I are planning to start preliminary research on the basic structure of the neutrons.
We assure you that the project will be conducted in a clean manner under the guidance of all our senior scientists. Therefore, I request you to grant us permission for the same. Thank you for your valuable time and consideration.

A business project proposal letter can be written to a client or to a particular department or related members of the same company for starting a new project or to continue working on a stalled project. Here’s a sample for your reference:

I, Kevin Heart, the team leader of the digital marketing team, am writing this letter to seek your permission to restart the ongoing project of our client, Mr. Smiths.
We had stopped working on the project due to payment issues but the issue has now been resolved from the client’s end. I’m attaching the screenshot of the conversation with the client where he has agreed to pay the remaining dues by this week.
Please grant us permission to start working so that we complete this project as soon as possible.

This letter can be written by an engineering student or by a professional to start new engineering or to restart a halted project. Here’s a sample for you:

I, Keaton Underwood, am working as a product engineer in your reputed Rasputin Engineering Group. Last month our team had undertaken a project on constructing folding river bridges but it was stopped due to sponsorship issues.
However, we have got new sponsors now and I have enclosed their information and details in the attachments. Please have a look at them and grant us permission to restart the halted project.
I’m hoping for a quick reply and confirmation from your end. Thank you for reading this letter.

Like all the other project proposal letters this letter also can be written to start or reinitiate an internal project or convince a client on a software project. Here’s a sample for your reference:

I, Pascale Patton, am writing this letter on behalf of Singhal Software Institute. Last week we had a telephonic discussion on starting on a joint software project with your software company, Digital Softek.
I’m writing this letter to seek your permission for the same. I have enclosed the details and requirements of this project in the attachment. Please have a look at them and convey your opinion on the same.

Thank you for your time and consideration.

A final year’s project is very important as it has a profound impact on the career of a student. This letter is written to convince a professor or principal for agreeing on the project proposed by a student or a group. Here’s a sample for your reference:

I, Jordan Calderon, am writing this letter on behalf of Group 32C of the Physics class. All the groups have been asked to suggest a project and therefore I take this opportunity to explain the nature and scope of the project we have decided to work on.
My group has decided to work on a project called ‘Relative time and space'. This will be focussed on the relation between time and space and will also discuss different theories and evidence provided by astronomers and scientists over the years. Therefore, I request you to grant us permission to start working on this project.
Thank you for your time and consideration.

This letter can be used by students to obtain the permission of the school authorities or principal for a particular research paper or project. Here’s a sample for your reference:

I, Sade Higgins, am writing this letter on behalf of group V (A) of mechanical diploma class. My group is planning to put our academic knowledge to test by undertaking a project where we will build a mini robotic crane that could be operated by any smartphone. We require your permission for this project and assure you that we will follow the guidelines of our college at all times.
I’m hoping for a positive response from your end. Thank you for your time and consideration.

This letter can be used by students to convince a teacher or principal for a particular project. Here’s a sample for your perusal:

I, Manpreet Singh, student of Class IX, am writing this letter to you on behalf of my science group. We have decided to make a science project for hydroelectric power stations.
The project will include a complete study of hydroelectricity and ways to implement it in real life. Therefore, we request you to grant us your approval for the same. I assure you that all the care and precautions will be taken by us and the project will be completed under the supervision of our parents.
I’m hoping for a positive response from your end. Thank you for giving us your precious time.

This letter can be used by undergraduate students to convince their teacher or principal for a particular project. Here’s a sample for your perusal:

I, Elmo Lopez, am writing this letter on behalf of group IV (C) of our diploma in home science class.
My group has decided to conduct a project dedicated to natural ayurvedic medicines of India for this semester. We will examine a few rare herbs and ayurvedic medicines and their practical use and impact on human health. I request you to grant us permission for the same.
The project will last for one month and we request you to grant us permission for the same. We assure that we will follow all the guidelines of the college while conducting the research work.
I’m hoping for a positive response from your end. Thank you for your time and consideration.

Qualitative research can be performed by university students or scientists. Therefore, they can use this letter to seek permission from their respective heads. Here’s a sample for your reference:

I, Liberty Walton, am writing this letter on behalf of Group 3 (B) of psychology division of the final year. My group has decided to undertake qualitative research on ‘The Effect of hormones on human behavior'.
In this research, we shall focus on different hormones that regular our behavioral patterns. Our project may include some visits to psychological departments and divisions. We assure you that we will follow all the rules of our college during our visits and research work. Therefore, we request you to approve our research proposal at the earliest so that we can start working on it.

Thank you for your valuable time and consideration.

This is a letter that can be used as a cover for a project proposal.

I, Cleo Best, am the head of the software development team of Cory Software Services. We had a brief telephonic conversation last night about the software project both our companies could collaborate on.
We have heard many positive things about the kind of work you are doing and therefore we feel grateful for your time and consideration. I have attached the details of the project as an attachment. Kindly go through them and let me know how you feel about it.

This letter can be used for acquiring funds for projects undertaken by NGO’s or non-profit organizations.

I, Lyle Sutton, am writing this letter on behalf of our water foundation named as ‘Jal'. Founded in 2005, we have worked to improve the groundwater level in different remote and rural parts of India.
We have started a new project named as ‘Irrigation' where we will guide the poor and underprivileged farmers to irrigate their land without natural rainfall. We will require some equipment for that and therefore I request you to provide some funds if possible.
I have enclosed the list of equipment and tools that we would require for this project. We would also appreciate if you could directly provide some of these tools to us. We have heard that your company has helped various organizations in the past and we hope that you would help us in this social cause as well.
Thank you for your precious time and valuable consideration. 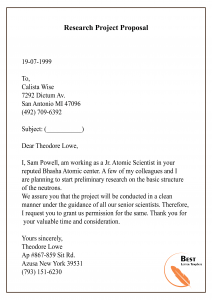