A Letter of Indemnity (LOI) that on contract guarantees some provisions that will meet in between two parties. These letter are drafted traditionally by another party that let’s we call a third party organization. It could be a bank or an insurance company who has agrees to provide monetary restitution to any of the parties, that when another party, if, fail to live or reach up to its obligations. If I’d speak in different words, the main function that LOI holds is mainly to ensure that in case of losses, it’s not that only one party will suffer alone even if another party falls delinquent. The concept of letter of indemnity has to make someone free of any casualty, and to keep them harmless.

Since it is an official letter and also carries a legal standard, a standard format is there that is used to write a letter of indemnity. The format is given below for you reference:

** Signatures with Dates and authorized seals (if any) **

How to Write Indemnity Letter

Following are the important tips that need to be put in mind while writing letter of indemnity. Hope they will appeal you and support the kind the letter you need to write.

Sample of Letter of Indemnity with Examples

It is always better when we get a reference to check or to get an idea about something we are working on. Therefore, here we have covered a few examples that might help in providing you some idea. For more examples and samples, you can visit our page, where more such samples are available.

Letter of Indemnity for Bank

Letter of Indemnity for Bank Guarantee

We/I hold ourselves/myself (or our/my successors-in-title) responsible in case of all the consequences that may come in existence while doing so. We/I hereby agree and undertake that you are being indemnified at all times against the claims, losses, actions, damages, expenses during proceedings, miscellaneous cost between the lawyer and client. We/I indemnify you with all other liabilities of any kind which might be incurred or suffered by you in any way from your doing so.

Furthermore, we agree that this agreement is liable to continuing liability and will remain effective and in force till the time you are discharged of liabilities under the told issued guarantee that provided you with.

Dear Sir,
I hereby confirm that I am authorized and liable to use my credit card against the booking the flight(s) with the purchase reference ID: FGUIND4856 and also that I are not the party who’s travelling.
Therefore, I hereby declare and agree to indemnify IDS International Airlines with the total amount of money aforesaid booking along with other associated charges incurred by the travelling agency.

Dear Mr. Who,
This is to write you that this letter is to guarantee that the digital marketing job that we have asked and contracted for with you is finalized. Since there has been a recent change in the standards of marketing, we need to make new reforms to overcome aforesaid obligations in regards to this contract. If we won’t be able to complete the task with in the time duration we have, we’ll hire another party to work with/for you that too not asking you for any additional expenses to your firm.

We appreciate your cooperation and apologize for the caused inconveniences.

Letter of Indemnity in Shipping

Dear Sir/ Ma’am,
The purpose to write you this letter of indemnity is to instruct you to release the parcels of ref. code GH5675 to Mr. Tulip of Longshaw Automobiles, at New York port, but with no production of lading bill.

The reference document is being prepared again because of some errors from the admin side but we are sure that delivery will be made without any concern to involved parties.

We agree to the terms and conditions aforesaid in the brochure we shared.

Thanking you for your patience and consideration.

We really hope that you found this article useful. For more such articles and samples, you may visit our page. Thanks for letting us help you!

Letter of Indemnity Templates in PDF and Word 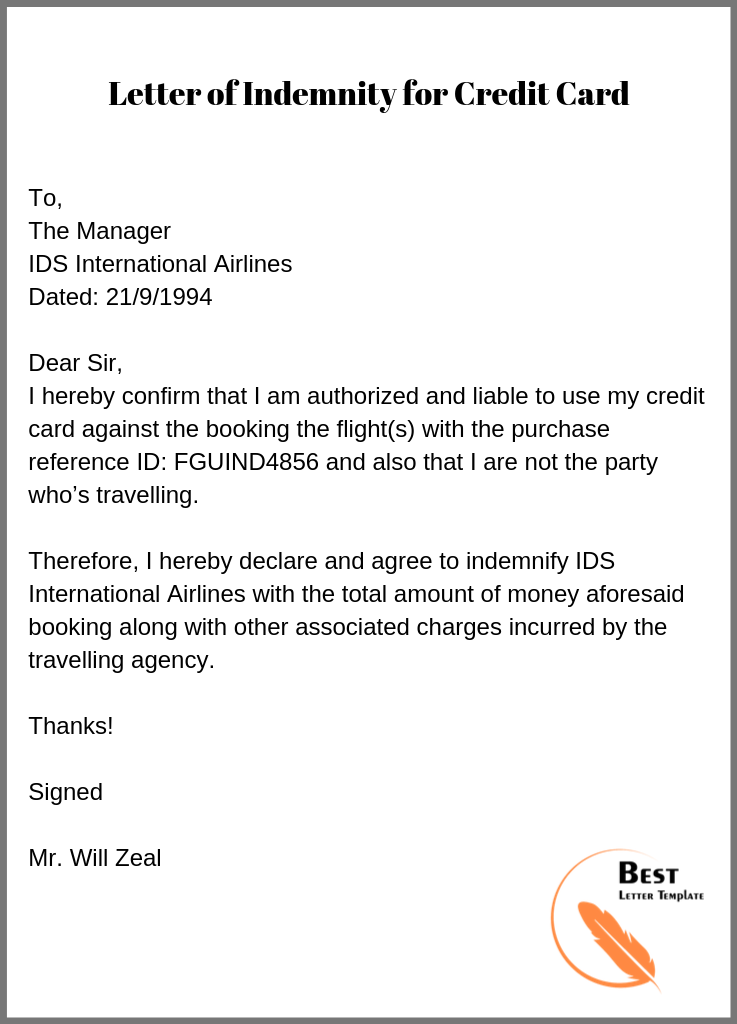 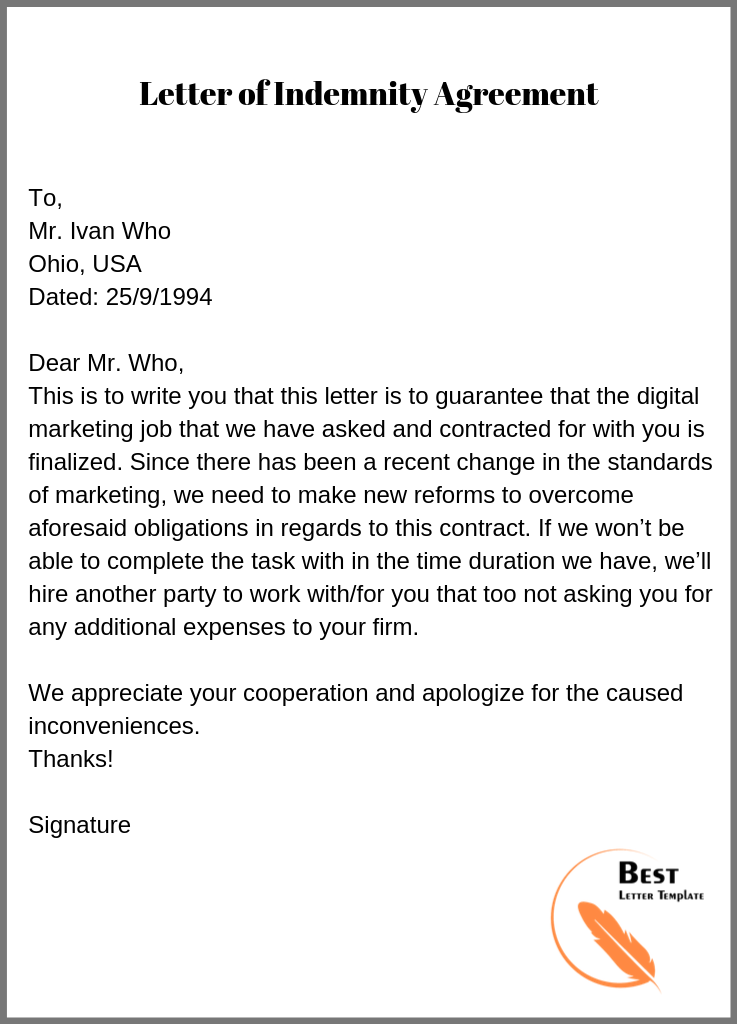